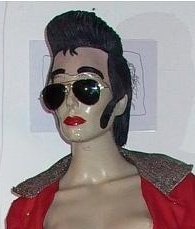 The Church of the Militant Elvis Party was founded in 2001 to overthrow the Corporate Capitalist State which turned Elvis, a man of immense talent, into a fat media joke. Lord Biro takes on Tesco – see Times Online “Lord Biro writes off unhappy hour at Tesco”

In 1997 I stood against Neil Hamilton at Tatton and was an inspiration to Peter Mandelsen and New Labour see letter. I formed the Church of the Militant Elvis in 2001 and stood against Eric Pickles in Brentwood and I stood in Erewash in 2005 against Kilroy Silk.  I’ve also stood in lots of Nottingham City Council elections the latest being Clifton North where I beat the Lib Dems. see  Guardian Electoral history they missed Eastleigh 2013. See recent Interview by BBCs Andrew Neil on Daily Politic

I am  a retired painter and decorator and spent most of my time as an artist and a poet (pen name Lord Biro). My poetry has been published in various magazines and newspapers including The Independent, The Guardian and the Daily Mirror. An abstract drawing of Elvis – “Moody Blue” – won first prize at the Annual Graceland Art Exhibition,  Memphis, in the “Non professional category” 1996. 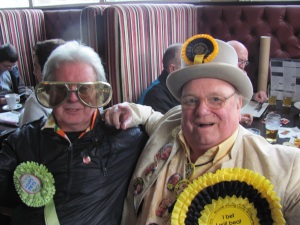 Apart from being a keen fan of Elvis, I’m also interested in green issues such as global warming, the destruction of the Amazon rain forest and the attempts by Tesco to takeover the high street. I also like political satire (Private Eye), seaside postcard artist Donald McGill, Andy Warhol, George Orwell and poet Edward Lear.

Pet hates include – Big Brother, gastro-pubs, children being targetted by big corporate brands, the New Nottingham Market Square and the mocking of the working class by middle class writers etc. More recent I have been standing as Elvis Loves Pets Party and here is a photo of me at the Eastleigh By Election 2013 with Howling Laud Hope Leader of the Monster Raving Looneys in Wagon Works Pub.

5 Responses to “About the Church”